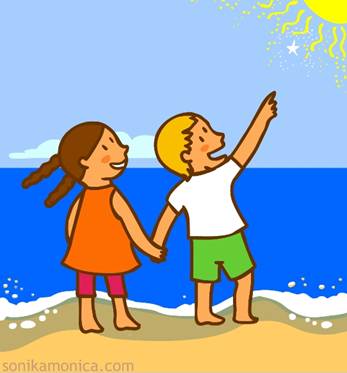 Imagine a place where everything feels light and fluffy just like candy floss, marshmallows and golden syrup. Soft, sweet yummiess melting in your mouth never wanting the delectable taste to end, never mind the wonderful warm feeing you have in your tummy…… then this feeling tingles throughout your entire body.

This is how Georgina and Jeremy felt as they were standing on a soft sandy beach far away from anywhere and anything. They were standing together holding hands looking out towards the mysterious blue ocean. Their feet were bare allowing them to feel the ocean bed gently lap up against their feet and ankles as it breathed backwards and forwards………backwards and forwards.

The sun was in his full glory – beaming down whilst shooting his grand rays of illuminating light upon this glistening and mystifying land.

All of a sudden Jeremy found himself looking up as he was drawn to a beautiful flicker of bright light that shimmered in between the sun’s rays.  The light was swirling and twirling around whilst growing bigger and bigger, and then it started to move closer and closer.

Jeremy and Georgina were standing tall, still holding hands as they looked at the light moving towards them. As quick as a flash the light appeared right in front of them and they could see that it was an enormous brilliant, sparkling star. They smiled at each other -both filled with excitement and wonder, waiting to see what would happen next.

They could not believe their ears as the star gently spoke, asking them if they wanted to go on a magical journey to a place filled with joy and happiness where they could feel safe knowing that the star would take good care of them.

To their astonishment the star quietly asked the children to jump inside as the journey was about to begin. First Georgina then Jeremy jumped right into the star whilst giggling with delight. Weeeeeeeeeeeeeeeeeeee!!!!

As the star lifted from the ground the children looked outside. It  was amazing because they could see right through the star and noticed that they were traveling through what seemed to be fluffy balls of cotton wool – gently drifting by showing themselves in all  the colours in the rainbow.  They also could see the sun’s beautiful rays glimmering and shimmering in between all the stunning and vibrant colours.

As if by magic the children now found themselves surrounded by a deep blue mist with pink and green twirls slowly moving around – this made them feel very calm and peaceful.  There was no sound – just stillness, and the star was no longer moving.

In the next moment the star gently told the children they had arrived at a very special place, and went on to tell them that they would never ever be able to forget this place, and soon they would find out why.

They jumped out of the star – once again holding hands, whilst giggling with real excitement wondering what they would see next.

Standing together right in front of them was the most spectacular golden pathway. This pathway was paved with golden nougats, which glistened in and out of the sun’s rays, and went round and around, up and up as far as they could see.

Without any words they looked at each other and smiled. They knew what to do next! They kept on holding hands and skipped up and up and up the golden pathway right to the very top.

When they finally reached the top, they boldly stood together with both of their eyes open as wide as they had ever opened before. Can you imagine how they felt as they looked ahead and right in-front of them was a magnificent gigantic crystal palace.

The palace was the grandest thing they had ever seen, and looked like something out of a magical fairytale.

In no time at all they were standing inside the entrance of the grand crystal palace. Just in front of Jeremy and Georgina was a winding corridor, which seemed to go on forever and ever, and at both sides of the corridor were different coloured doors.

To their astonishment a mystifying and enchanting voice spoke, saying that they were now entering the very special rooms within the palace.  The voice went on to tell them that they could each choose a door. Jeremy’s favorite colour was yellow so he chose the yellow door, and Georgina chose the green door.

Jeremy opened his door and walked straight into the room. To his delight the room was filled with the bright golden rays from the sun. He could feel the warmth on his body and felt happy inside – in a way that he had never felt before.

Georgina opened her green door and walked inside where she found herself floating around the room in a wonderful green fluffy cloud – just like the magical cotton wool balls.

She felt really good inside – her heart was calm and quiet, and she also felt the happiness just like Jeremy.

The kind voice then whispered that the palace was a special place just for Georgina and Jeremy, and any time they closed their eyes and thought about it they could return.

In another faraway land as you and I know – it was daylight, and the sun’s rays were peeping through the curtains.

Jeremy leapt out of bed and tapped his sister Georgina on her shoulders as she lay sleeping in her bed next to him.

She woke up and rubbed her eyes ready to start the day.

She told Jeremy how she could remember that she had had a wonderful dream that night about a special magical place that made her feel really good and happy inside. Jeremy chuckled and told Georgina that he could remember being there with her.

Each night before they go to sleep, Georgina and Jeremy gently close their eyes and drift off into their very own magical twilight journey, which always leads them to the crystal palace.  I wonder which door they will choose next?