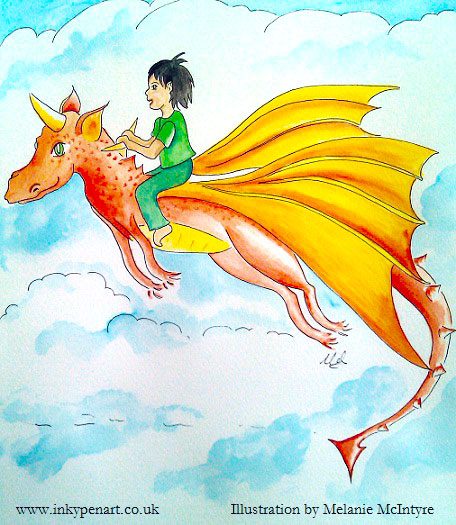 “Look there’s a dragon shaped one” Jack said as he lay on his back in the meadow looking up at the clouds.

Lunar wasn’t impressed and just blew dragon shaped smoke rings to prove a point.
“Where will we go today?”

Lunar rolled over to bite his itchy tail and pondered. Have you ever heard of the Mayans? He said.

The Mayans? No what’s that?

“Not what, WHO” the dragon said.

“Oh, who are the Mayans?” Asked Jack getting interest, it sounded like another adventure.

The dragon chuckled, he turned to Jack and said “as I always say, the best way to learn something is to see it for yourself, climb aboard young man”

As they climbed higher and higher Jack’s hair and clothes became wet from the clouds. He never got tired of the thrill of riding his dragon.

“Yahoo” he shouted at the top of his lungs.

He loved the way his tummy jumped when Lunar dived down quickly and then pulled back up again. It was like being on a roller coaster.

Jack loved that his dragon had magical powers and could travel into the past. They got to see all kinds of cool things. When they went to Egypt he actually saw a real pharaoh and when he went to Peru he saw the ceremonies the Incas preformed.

“I wonder what the Mayan’s are like” he wondered to himself.

They were heading for Mexico to where the Mayans had lived and built sacred temples.

“See not everyone is wearing the headdress.”

“I wonder what they are up to.”

“Let’s go and watch from that oak tree over there, we will be able to see clearly and we can rest too.”

Lunar shrunk himself to a comfortable size to fit into the tree and Jack found a comfy branch.

He took out a biscuit from his pocket; he was used to bringing snacks when he went out with Lunar because he never knew where he would end up. He broke the biscuit into two and offered some to Lunar.

Jack and Lunar sat high up in the oak tree watching the ceremony below.

They watched as people gathered and cheered as a line of priests dressed in robes and feathered headdress came out to a clearing. The priests stood around in a circle and began to hum and chant.  The symphony got faster and louder until it no longer sounded like human voices. Jack noticed what looked like a boulder hovering in the sky and moving slowly towards the circle of Mayan priests. As it got closer the priests changed the tone of their chanting and the boulder began to descend into the middle of the circle. With the change of the chant again the boulder began to sink deep down into the soil, further and further it dropped creating a hole. Again the priests chanting changed and the boulder rose into the air again.

One of the priests raised his hand and two others entered the circle carrying a wooden chest. They placed it down and opened the lid. Jack gasped as he saw its contents. It was a skull carved from clear quartz crystal.

“Wow” he whispered to Lunar.

He didn’t have to whisper because no one would hear them; he still couldn’t get used to the fact he was invisible and in a soundproof bubble when he was with Lunar.

They watched as the priests blessed and sang over the crystal skull.

Then they began to chant again as they wrapped it in a sacred cloth and placed it in the hole they had created with the boulder. They then began to sing and play instruments as they filled the hole back in.

Luna looked up at the sun.

Jack climbed on his back again. “Wow Lunar was that a real skull?”

“It’s a very special skull Jack. It’s like a computer that holds a lot of sacred wisdom and knowledge” Luna told him

“Come on I will tell you about it on the way home.”

Together they soared the skies again, heading for home.

“That skull was found again not all that long ago, it was buried for a long time. It was hidden so that it wouldn’t fall into the wrong hands; it’s very powerful you see.”

“Why is it very powerful Luna”

Luna explained “hundreds of thousands of years ago there lived an ancient super advanced civilization called the Atlanteans. They were the ones who made the crystal skull. In fact they made 11 more such as the one you saw today plus a 13th one made from amethyst. Each of the 12 clear quartz skull holds one piece of the information and the amethyst skulls holds the entire information combined. The skulls were taken to various parts of the world and kept secretly hidden until people were ready for the information encoded in. The one we saw today was found and is now called the Mitchell Hedges crystal skull. People meditate with it and it gives them information that will help heal the planet and help people to live happier healthier lives.”
“Where are the other ones hidden Luna?” asked Jack.

“They will be found when the time is right Jack, for now humans are blessed with one piece of the information. I think its coming to London for an exhibition soon, why don’t you ask your dad to take you to see it?”

In no time at all Lunar was landing in the field next to their house. It was getting near to tea time so Lunar went into the sheds where he lived and Jack went in and washed his hands ready for tea. As he sat around the table Jack asked his dad if he had ever heard of the Mitchell Hedges Skull.

“There was a notice up in the library last week” mum said “I didn’t know you were interested Jack. It’s in the museum soon. I’ll phone the library and ask them the dates”
“Oh good said Jack, can we go please”

Jack was impatient in the queue to see the Mitchell Hedges skull, he wished the line would hurry up and move. He was quite near the front but the doors into the area where the skull was on exhibition were not open yet.

“Finally” he thought as the doors swung open.

Jack and his parents went in and found a seat near the front. The skull was on a large table with a cloth covering it.

When every one was seated a man came out to explain where the skull had been found and that it was a miraculous carving because even with the technology today it couldn’t have been created so flawlessly.

As Jack looked at the skull he heard a voice in his head say “hello again”
Jack was startled. Did the skull just talk to me? He wondered

“Err hello”, Jack replied with his thoughts. “Nice to see you again.”

“Thank-you for coming to see me” the skull seemed to say to him.

“Sit quietly and I will put information into your mind, it may not all make sense but it will one day”

Jack sat quietly and listened. All he could hear was high pitched humming noise. He wished he could understand what the skull was telling him. He tried to listen harder but all he got was a headache.

Jack had to admit that he was disappointed he couldn’t understand the information the skull had given him,

“Don’t worry Jack” Lunar consoled, you are very lucky that the skull spoke to you and it even remembered you, it was only a few days for us but its thousands of years for the skull remember.  Its amazing it even saw us through the undetectable spell when we were in the tree.”

“You’re right” said Jack “I am very lucky. I know one day I will know what the skull said to me”.

“Yes when the time is right” said Lunar.

“Off to bed with you now, you never know what adventures tomorrow will bring”