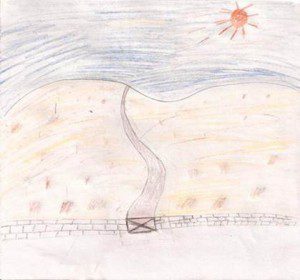 Reece was feeling so hot it was an effort just to move. He was on holiday with his parents in Crete; his teenage sister Chellie hadn’t wanted to come and was staying in Cardiff with a friend. The air conditioning didn’t work properly in his room and he was waiting another five minutes to go to the pool to meet his new friend Katharina. She was from Germany and was a year older than him. She had a big imagination could always think of fun things to do. He was really going to miss her when they went home the following Tuesday. He was glad his sister wasn’t there to tease him about it.

‘You might want these,’ said Mum, throwing his swim shorts in to him that were bone dry after being out on the terrace in the baking hot sun. There was a heat wave and Mum was constantly going on about sun cream and hats. As if he was going to wear the foolish looking hat she had bought in the local supermarket! He got dressed into his shorts and t-shirt and pulled his beach towel over him before padding carefully down the many stone steps to the pool in his crocs. He had brought cold bottles of water as well, as Katharina had asked him to. They were going somewhere new today: ‘A surprise’. He liked the way she talked in a weird way. Her English was much better than his German, and her accent was quite strong and stayed in his head for a while after she had finished talking.

‘Later,’ he called to Mum, and hurried out before she could start on about re-applying sun cream for the hundredth time. He felt somehow nervous as he turned the corner for the pool. There she was. He had a strange feeling in his tummy.
‘Kali̱méra,’ she called to him. She was with her parents by the pool. Her dad was so tall Reece felt tiny next to him so he tried to stand away from him near her mum instead.

‘Uh, guten tag,’ he replied awkwardly. ‘German is tough enough but Greek is out of the question I’m afraid,’ he thought to himself.
‘Very good Reece,’ Katharina’s Mum said to him with a big smile. Then she began a long dialect in German to Katherina which was difficult for Reece to follow. Katherina had a bag with what looked like a picnic in it. He hoped she had brought something nice and not too weird.
‘Come on then Reece,’ she said and led him away from the pool which looked so inviting.
‘It’s baking,’ Reece complained.

‘Just like bread,’ she replied shortly, striding ahead full of energy. She led him past some small white houses, where a really old local lady dressed from head to toe in black sat out in the sun. Tiny kittens played around near her. The cobbled road was working its way uphill and getting narrower.

‘Do you know where you are going?’ Reece asked, sweat streaming into his eyes.
‘Of course,’ she said. Soon up ahead was a small gate that led to a narrow path which went off up into the mountains.
‘You can’t be serious,’ he said. ‘It’s like forty degrees.’
Katharina just sighed and pushed on ahead. ‘It will be worth it… promise,’ she said after a while. Reece thought grumbling thoughts, as the wiry dry bushes scratched his legs and pieces broke off into his shoes. Soon he could see what she meant. The view was amazing.

And there was a narrow rocky path down to a tiny golden beach. The sea was twinkling deep blue with a few boats which looked to sit very still. The sun was so hot; it felt as though it couldn’t get any closer. A brown goat grazed at the top of the cliff, and Reece wondered how on earth he survived the heat and ate away at the dry bushes that clung to the sun baked earth. He couldn’t wait to get down to the water. Katharina was already weaving her way down. Reece followed after her, imagining the cool waves washing over him.

The beach was completely deserted. All that was there was a small old fishing boat with flaking blue paint and some Greek letters on it pulled up against the cliff with two oars resting beside it.

They laughed and played in the water, taking turns with her snorkel and goggles looking at the beautiful small fishes of all different colours that hugged the rocks and weaved in and out of the coral. Afterwards they sat on their beach towels and ate the picnic she had brought. It was delicious: crackers, cheeses and fruit and some cakes he had never seen before. Not the kind of food he would have picked out but for some reason it tasted more delicious than any picnic he had ever had before. She suggested they put on more sun block.
‘Wow, you sound just like Mum,’ he said.
‘I am like your Mum?’ she exclaimed. ‘This is not good,’ she said, and squirted him with sun lotion before racing back into the water for another swim. Reece laughed and followed her in. This was the best holiday he had been on in his whole life. If only he could stay there forever. It was paradise.
They had no idea of the time but decided it might be time to go as the sun was very high in the sky and it seemed even hotter. It was a hard climb back up the cliff and they were surprised to see the brown goat scrambling down against them towards the beach. As they approached the top it was obvious something was very wrong.
‘That smell. Something is burning?’ Katharina said, she looked terrified.
As they turned the corner they saw that the scraggled mountain bush was on fire and spreading quickly right near them. It was in the way of the path back.

‘Hurry, we will have to go around,’ she said, tugging Reece in the opposite direction. The flames crackled and snarled and were moving fast; it seemed as though they would not make it around.
‘We’ll have to go back down to the beach,’ said Reece, remembering the small boat. But when he looked around the fire had spread so fast it was now blocking the entrance to the beach path down the hill. There was no way there now either.

The heat was merciless and the air was filled with black smoke. Reece’s head felt fuzzy and suddenly black dots began to appear before him. The next thing he saw a glow of white and blue light and two very tall men were striding towards them. One picked up Katharina and the other Reece, hoisting them effortlessly onto their backs.

Reece rubbed his eyes and found himself at the top of the narrow road, being lifted onto a stretcher by paramedics. He and Katharina were being taken to hospital. Their parents’ were also there, frantic with worry.
After some tests the hospital staff said that Reece was okay to be discharged that day as well as Katharina who was with her parents. They had both escaped injury and smoke inhalation, despite having been caught in the middle of a mountain bush fire.
‘How did you escape?’ asked Dad. Reece told the story from the beginning, the doctor listened in. The room was lovely and cool.

‘This is impossible,’ said Dr Papadiotis. ‘These two men? Where did they go? You were both alone when the help came. It was a miracle. Rescue workers are still trying to put out the fire.’
‘They were there, these men, and a really bright light.’
‘Are you sure he is fit for discharge?’ Dad asked the doctor. ‘He must have been hallucinating.’
‘Halloowhat!,’ Reece said, but they weren’t listening to him.
‘Yes, I am sure. Sometimes people dreaming when these things happen. They… see things. He is now okay,’ said the doctor, with a warm smile.

When they were back at the apartments Reece was anxious to go and see Katharina, but Mum and Dad said he would be taking it easy and staying in for the night. He hoped they didn’t think it was her fault and not want him to see her any more. All was well the following morning. Reece was glad to hear the fires had been put out, with the help of helicopters and a huge rescue effort. He heard they even found the goat who was waiting on the beach, unharmed. He was feeling fine again and went down to the pool where he met Katharina.
‘I think our adventures will have to be here at this pool at least for this morning,’ she smiled.
‘Katharina, what happened yesterday? I mean how did we get out of that? We were dead meat!’
‘It was a close one. You know that angels rescued us Reece. Didn’t you see them? You seemed to have passed out, maybe you didn’t.’

‘No. I did. I did see something. I saw two tall men.’
‘Angels,’ she corrected him. ‘They had golden wings. They were angels.’

‘Don’t you think that sounds a bit strange?’ Reece asked, secretly remembering his own experience meeting his angel Malachi, and going to a crystal cave and seeing a dragon. He wondered if one of the men was in fact Malachi. He didn’t want to talk to Katharina about it just now.
‘Strange but true. If there is… an emergency and it is not your time to die, the angels can step in and rescue you. They looked human to you but I saw them with wings and light around them. How do you think we are okay even though there was all that black smoke and no way out? It’s a miracle, yes?’
‘It is. It’s a miracle.’ Reece thought for a few minutes, resting on the lilo and dipping just his toes in the water. ‘Thanks Malachi,’ he whispered so she couldn’t hear him. He felt a warm feeling around his heart and thought for a second he could see blue and golden lights. He blinked several times to make sure and they gradually faded. ‘Katharina, I was thinking, maybe we could put off going to find the Minotaur till tomorrow.’
‘Are you sure? I have found the map we need on my mother’s iphone,’ she grinned mischievously, and capsized his lilo before diving under the water as quick as a fish. Reece lunged after her.