Esmerelda and the Unicorns Tail 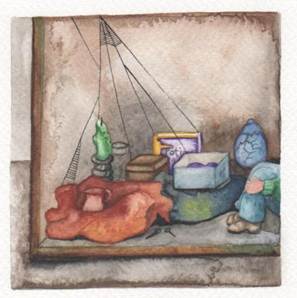 Esmerelda Postlethwaite wanted a dog of her own so badly it hurt – and she had tried just about everything she could think of to get one. Pestering her parents had got her nowhere, even when she followed the advice of a cousin who said that if you wanted a dog you had to start off by asking for a horse. Pulling out her lashes to wish upon just left her eyelids sore, and even Father Christmas turned a deaf ear to her pleas.

Then, one day, she was playing hide and seek with her friends in an old abandoned house, when she stumbled upon a tatty book tucked at the back of the cupboard in which she was hiding. Wiping the dust from the cover, she revealed the words Potions and Lotions written in squiggly silver writing. With a thrill of excitement, Esmerelda opened it up to find it was very like one of her Mum’s recipe books, but instead of the usual, rather boring, instructions for making and baking cakes and pies, this book had instructions on how to mix magical charms.

On one page was a recipe for curing warts by squeezing the juice of a toad onto them, and, on another, instructions for roasting a mouse and grinding its bones to make a paste that would cure any cough. Yuk! Esmerelda wrinkled her nose in disgust. But, it was a recipe at the back of the book that really caught her eye and set her mind racing. Under the title: How to Obtain your Heart’s Desire was a very short list of ingredients: Essence of Dragon’s Fire and Three Hairs from a Unicorn’s Tail. Heart thumping, Esmerelda read on.
There should be no trouble in getting hold of the Dragon’s Fire Essence, the book explained, as any good alchemist should be able to supply it. (Esmerelda wasn’t sure what an alchemist was, but guessed it to be an old-fashioned word for a chemist.)

However, the book continued, obtaining hairs from a unicorn’s tail was likely to prove more of a problem, as unicorns were becoming much harder to find. Esmerelda frowned. She was pretty sure they didn’t exist any more. They were mentioned in fairy tales, of course, but everyone knew fairies belonged to another world, the world of magic and make-believe. They didn’t belong in real life. Still, she thought, it had to be worth at least trying to find one if it would help her to gain her heart’s desire. Setting her lips in a determined line, she tucked the book into her jeans and, forgetting all about her friends, slipped out of the cupboard and raced up into town. She needed to find a chemist before they closed for the night.

The girl behind the counter narrowed her eyes and fixed Esmerelda with an unfriendly stare. ‘Essence of Dragon’s Fire? Are you having me on?’

Esmerelda’s cheeks started to burn. She tried to explain about the potion, but the girl just rolled her eyes and tapped her scarlet-tipped fingers on the counter impatiently. Disheartened, Esmerelda was turning to leave when an elderly man in a white coat appeared from the back of the shop and motioned the girl aside. ‘Maybe I can be of assistance,’ he offered, his eyes twinkling kindly behind round spectacles. ‘Essence of Dragon’s Fire, did you say? Hmm, let me see. I think we might have some in the store room.’ He disappeared for a few minutes, then came back holding a tiny, green glass jar and handed it to Esmerelda. ‘Take great care of it, my dear,’ he instructed. ‘It’s powerful stuff.’

Esmerelda stammered her thanks and dug in her pockets for some money, but the chemist waved it away. ‘There’s no charge,’ he smiled.

Esmerelda was struck by a thought. ‘I don’t suppose you have any unicorn hairs as well?’ she asked eagerly.

The chemist shook his head. ‘I’m afraid not, and, I don’t know where you might find any.’ He scratched his nose thoughtfully. ‘I suppose you could always try looking in the Crumply Mountains. If there’s any magic left around here that’s where it will be.’
Esmerelda beamed at him gratefully and, clutching the precious jar, she hurried home. She would begin her search for a unicorn that very weekend.

And, so it began. Thanks to the Government having passed a law that allowed children to drive provided they were tall enough to reach the pedals, Esmerelda was lucky enough to have her own car, so every Saturday and Sunday, as soon as she’d finished her chores, she climbed behind the steering wheel and set off for the Crumply Mountains. This was a wild, forsaken place, steeped in legend and mystery and Esmerelda could quite see why the kindly chemist had advised her to search there. For hour after hour she scoured the hills and wooded valleys for any sign of a unicorn, but after several weekends of fruitless searching she was on the verge on giving up.

Then, one Sunday afternoon, she found herself in a part of the Crumplies she hadn’t searched before. Stopping the car at the crest of a hill, she spotted some twisty chimney stacks sticking up from the midst of a small wood. It was the first sign of a house she’d seen in all her weeks of searching. Maybe the owners could tell her if there were any unicorns left in these parts. With hope in her heart, Esmerelda drove down the hill looking for a driveway that would lead her to the house, but there was none so she parked the car at the side of the lane and set off on foot across the springy grass.

The house to which the twisty chimney stacks belonged was much bigger than she’d expected – and had clearly been deserted for many years. Wild tangles of plants obscured the windows and barred her way to the entrance. Intrigued, Esmerelda made her way round the side of the house and found an archway set into the wall. Cautiously, she passed through and found herself in a cobbled courtyard surrounded by dilapidated outbuildings.

All at once, she had the distinct feeling she was being watched. She spun around – and there, at the gate leading from the courtyard into a pretty apple orchard, stood a plump, dappled pony with  bright blue eyes. ‘Hello.’ Esmerelda let out a sigh of relief as she walked over to the gate and reached out to stroke its velvety nose. ‘It’s a shame you can’t talk. I’m starting to feel rather lonely.’

‘What makes you think that I can’t?’

Esmerelda’s eyes bulged in disbelief. ‘Was that really you?’ she whispered
‘Well, I don’t see anyone else here, do you?’ The pony yawned, then scratched his leg with his teeth.
Esmerelda quivered with excitement. ‘Gosh, I wonder if you can help me?’
The pony swished his tail at a fly. ‘I might,’ he said. ‘It depends what you want.’

Esmerelda told him all about the potion and her quest for a unicorn and when she’d finished the pony regarded her steadily. ‘You may take three hairs from my tail, little girl, but be sure to pull them out gently or I shall kick you.’
Esmerelda smiled sadly. ‘That’s very kind of you, but it has to be the hairs from a unicorn, you see. Nothing else will do.’
The pony snorted and stamped his hoof. ‘I AM a unicorn, you silly girl. Can’t you see?’
Esmerelda giggled. ‘Well, er, no actually. I always thought unicorns had horns.’ She was going to add that she’d always believed them to be stunningly elegant and beautiful as well, but thought better of it.

The pony sighed. ‘What has the world come to?’ he muttered. ‘There was a time when children could still see things that grown-ups have long since been blind to, but it seems even children have lost their magic now.’ He shook his head sorrowfully. ‘I blame television and all this other modern nonsense. It’s dulled your senses.’

Esmerelda opened her mouth to protest, but the pony turned and trotted away across the orchard. ‘I’m sorry,’ she called after him urgently. ‘If you say you’re a unicorn, then I believe you.’
The pony stopped and looked back over his shoulder. ‘You do? You’re not just saying it?’
Esmerelda looked straight into the pony’s blue eyes and took a deep breath. ‘I really, truly do believe you’re a unicorn,’ she said solemnly. And, suddenly, she found it was true; she really did believe he was a unicorn. And, right there and then, before her eyes, the pony was transformed into a gleaming white, exquisite creature with a silver horn in the centre of his forehead glinting and flashing in the light of the sun. Esmerelda’s mouth dropped open. She had never seen anything so beautiful in all her life.

The Unicorn walked proudly back to the gate and turned around to present his flowing tail. Esmerelda hardly dared to touch it, but she reached out with a shaking hand and carefully, very carefully, plucked out three silken hairs.
‘There,’ said the Unicorn, ‘you have what you need. Be mindful of what you wish for – and remember, it might not always appear in the way you expect.’
‘Thank you, oh, thank you,’ Esmerelda stammered in delight. She wanted to hug him, but she didn’t quite dare.
The Unicorn gazed at her thoughtfully for a moment. ‘I’m going to let you into a Very Important Secret,’ he said at last. ‘The hairs from my tail will help you perform simple charms, but the really powerful magic lies deep within you. If you truly believe it in your heart, then everything is possible. Now, off you go. I’ve got apples to eat.’ And, with that, he trotted away to the far end of the orchard.

Trembling with excitement, Esmerelda hurried back to her car. She couldn’t wait to get home and mix up the potion. She had no doubt at all it would work – and, as the Unicorn said, if you truly believe it in your heart, then everything is possible.