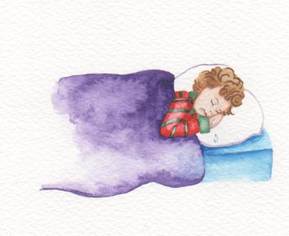 It had been two days since Billie’s death. And Josh couldn’t stop crying. Samuel had tried everything to cheer Josh up but, it was no good. Without his beloved puppy Josh was brokenhearted.

That night, Josh cried himself to sleep again. Samuel watched him from the shadows.

As his guardian angel he was unable to take away his pain so he watched and surrounded him with light and love, knowing in the morning that Josh, would feel much better. And when he was sure Josh was fast asleep, Samuel scooped him up in his strong wings and sped through the night sky, to the temples of light. Mid way, Josh opened his eyes, “Where are you taking me?” he asked, sleepily.

Moments later, the pair landed in a blindingly, bright land. Thousands of fluffy feathers lay on the shimmering ground and nearby, a choir of angels sang.

Samuel sighed and closed his eyes in bliss.

Josh gazed up at the cloudless, blue sky and gasped. No wonder the garden was covered in feathers, hundreds of shining angels, some as tall as sky-scrapers, shone all around him. The sight was so wonderful that Josh, felt the sadness in his heart once more and tears filled his eyes.

Samuel wrapped Josh in his large wings, “They have all come to help you. Aren’t you lucky? And Look! I wonder, what that is?”

Josh rubbed his eyes in disbelief as a large, blue ball of light, hovered above them. It landed nearby and split in two.

“Quick,” said Samuel, grabbing Josh’s hand, “let’s get inside before it takes off again.”

Josh didn’t hesitate and together they stepped into the bright pod. Silently, the pod closed and seconds later it lifted into the air.

Inside lights flashed and a strange high pitched hum surrounded them. Josh couldn’t believe his luck. It was like being given his very own space- ship. He watched, wide eyed as flashing lights streamed past. They were obviously, travelling at great speed and Josh loved it, he didn’t feel scared one bit.

Moments later the pod landed in a vast land of light. Josh had to shade his eyes with his hand as the blazing, white light was too hard to look at.

“Are we in Lapland?” asked Josh, mistaking the white light for snow.

“No.” said Samuel, ruffling Josh’s hair, “We have reached Mary’s home. We are in the land of angels’, my home. Isn’t it beautiful?”

As Josh nodded, he saw five shining angels, waving to him. He grinned and waved back.

Then the angels walked towards them and as they approached they revealed the most beautiful lady. She was seated on a blue crystal throne, endless rose petals rained down upon her, and she shone like a thousand suns.

Josh couldn’t hold back and ran towards the lady Master. As he passed, the angels stroked his face and hair and he tucked his chin into his neck, and smiled shyly.

“Josh,” said the Master, rising to her feet and embracing him, “I AM Mary, Queen of the angels.”

Josh found himself truly tongue tied before the beautiful Master, “Erm…hello Miss Mary.” was all he could bring himself to say.

Mary smiled sweetly and touched his cheek, “Come with me, Josh. Your angel has told me how sad you have been lately. Would you like me to help you feel better?”

Josh nodded, gratefully, unable to tear his eyes away from the radiant Master. She wore a shimmering, blue robe, a long veil covered her golden hair, and a crown of stars glowed around her head like a mini universe.

“Tell me, Josh.” said Mary, sitting back down on her throne, “Why have you been so sad?” At this Josh felt fat, hot tears well up in his eyes. Mary gazed at him with tears filled eyes, too. She opened her arms and Josh climbed on to her lap.

“My puppy Billie, died.” he sobbed, “He was…run over and it’s my fault…I threw him a ball…and he ran out into the road…and a car…”

“Shhh shhh!” whispered Mary, tenderly rocking him in her arms. “It’s nobody fault, Josh. It was simply his time to go and that could not be changed. So please, do not blame yourself.” Josh let out a big sob, “But, he was only a puppy!” he wailed. “I know, Josh,” said Mary, “It is hard to understand but look at how much joy he gave you, even if it was for such a short time.”

Josh sniffed and as he did the smell of roses filled the air. Josh liked the scent and breathed it deeply into his lungs The Master wrapped her blue veil around him and he closed his eyes as a cool breeze surrounded him.

Mary had read his mind, “The scent of roses help to open the heart, Josh. And once it is open you can release all old pain and grief…That’s it Josh, let it all go.”

And as he cried a column of sparkly, blue light fell from the sky and surrounded the pair. Josh felt warm, tingly energy touch his heart as if someone was holding it and even, more tears trickled down his face. Then the column of light slowly vanished and Josh, rubbed his red eyes.

“Does that feel better?” asked Mary, staring deeply at him.

Mary cradled him in her arms for a few more moments and knowing something that would make him feel even better, she whispered a secret into his ear.

Then Mary, adjusted her veil and stood up, “Josh, it has been a pleasure meeting such a brave soul. I AM Mary. I am always with you, along with the company of heaven.”

With perfect timing a tiny, blue butterfly fluttered by and landed on Mary’s radianthand. She laughed and gently kissed it, before placing it into Josh’s heart.

“A present.” she said, “For one of my favourite children.”

At last, Josh was happy again and he couldn’t stop smiling. He could feel the butterfly inside his body and he began to giggle. A butterfly in his heart was very tickly! This made Mary smile and she blew him a kiss before disappearing into the sparkly land of light. And when the Master had left, Samuel returned and enfolded him in his wings. Then Josh heard the hum of the light-pod and together with his angel they stepped back inside, the haunting songs of the angels, filling their ears.

Josh stared at Samuel’s face and was surprised to see him looking sad. He sensed it was hard for him to leave his home, so he squeezed his glowing hand.

“You feeling sad?” he asked.

Samuel nodded his head, “Yes, a little. It would be nice to stay.” He explained, “This is my home but you come first. From the whole of humanity I chose to love and protect you. So, where ever you go, I go too. And you know what? I wouldn’t have it any other way.”

Josh had never loved Samuel more and he grabbed hold of him and hugged him, tight.

“I know I don’t always tell you, but I love you, Samuel. You’re the best guardian angel in the whole world!”

This made Samuel so happy that his golden aura blazed with light and he fluffed up his mighty wings. Gently, the pod landed in the first land of light and Josh, smiled as he clung to his angel for the long flight home.

After some time, Samuel nudged Josh and asked, “Did Mary tell you a secret before?” Josh grinned as he remembered the Master’s words, “Mary told me that Billie is alive and well and in heaven!”

Samuel smiled, “Well, isn’t that what I’ve been telling you all along?” he said and ruffled Josh’s hair.

Once back in his bed, Josh stared in disbelief at a framed picture of Billie. It was in its usual place on a table next to his bed but now, it was completely covered in rose petals.

Josh laughed and silently, thanked Mary for her gift and for the first time in two days, he didn’t feel like crying.