Tara and the Baby Unicorn 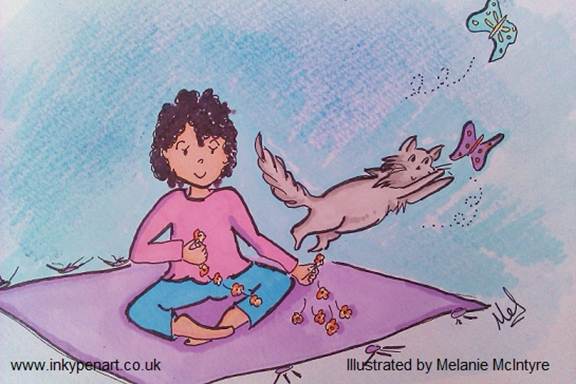 Tara had spread a rug under the oak tree and she and Ash-ting her kitten were sprawling out on it.  She was making a big daisy and buttercup chain while her kitten was chasing flies.

Suddenly dozens of elementals appeared.  They were running and flying and calling each other as they settled round Tara and Ash-ting.  ‘A unicorn is coming,’ Ash-ting told Tara and she sat up quickly.

A few moments later Tara, Ash-ting and a whole crowd of fairies, elves, gnomes, pixies and other little people were sitting or standing under the oak tree eagerly watching for the unicorn.

And then it arrived in a ball of white light – a magnificent white horse with a horn of gold light.
A gasp of joy and wonder went up from the gathered elementals.

They quickly moved to form a ring round the magic horse.  Ash-ting and Tara stared at it with big eyes.  The wonderful unicorn turned in a circle and poured stars of silver and gold from his horn in a cascade over them all.  Then he faced Tara.
‘Hallo Tara.’
‘Hallo unicorn.’  She stood up and stroked his nose gently for she had met him before.  The unicorn’s eyes were blue and soft, full of love.  It said, ‘I have something special to show you, a gift for you.’
Tara’s heart skipped as she glanced at Ash-ting but the kitten shook his head.  He didn’t know what it was.  A smile of anticipation lit up her face.

At that moment there was a huge flash of bright light, like a bolt of lightening and puffs of cloud filled the circle.  For a moment no one could see anything.  Then it cleared and everyone cried out in joy.
The big unicorn was lying down on the ground and beside it was a tiny baby unicorn with a little silver horn.

Tara was longing to run forward and stroke the baby foal but Ash-ting warned, ‘Wait a moment Tara.  Wait until you are invited.’  So Tara just stood there looking, desperate to hold the tiny unicorn.

The elementals all started to sound a soft low hum to welcome the new arrival, while hundreds of fairies, elves, sylphs, imps, pixies, goblins and dragons appeared and joined the circle.
Then the big unicorn turned to Tara.  ‘You may come forward now,’ it invited her.
Ash-ting whispered to her to put her daisy and buttercup chain round the foal’s neck.
‘Oh yes!’ agreed Tara happily.  ‘Come with me Ash-ting.’  She walked across the circle and knelt by the baby unicorn, placing her flower chain round his neck.  The kitten walked proudly beside her and everyone cheered.
Then the little girl stroked the baby unicorn while the big one looked on happily.
At last the big unicorn spoke and it gave Tara a huge surprise.

‘Tara,’ it said gently.  ‘The baby is called Zandara, which is unicorn for Peace Bringer – and it is to be your unicorn.  It will grow up as you do and help you.’
Tara was almost speechless with joy and gratitude.
‘Zandara,’ she repeated over and over again.
‘Say thank you,’ whispered Ash-ting.
‘Oh thank you,’ laughed Tara.  ‘Thank you so much.’

‘Zandara,’ sang the elementals, greeting the little one by its name as it stood up on wobbly legs.  Then it turned in a circle exactly as its mother had done and a tiny shower of stars flew out of its tiny horn.

All at once Ash-ting darted past little Zandara calling, ‘Catch me if you can.’

The baby unicorn glanced at his mother who nodded, then it chased after Ash-ting followed by Tara and a stream of joyful elementals.  They ran round and round the oak tree, all clapping and cheering and laughing.
At last the big unicorn called them back.  It told Tara and Ash-ting that Zandara needed to rest now and must go back to the unicorn kingdom but if they wanted to Tara and Ash-ting could visit them.
The little girl and her kitten were thrilled.  Tara was jumping up and down in excitement.
‘Now?  Can we come with you now?’ she asked hopefully.

Just then they heard Mum call them for lunch.  Tara’s face fell.
‘I could pretend I haven’t heard her,’ she said.  But Ash-ting was very firm.
The two unicorns were watching so Tara said, ‘I’ve got to go but please could I come another time?’
‘Of course,’ agreed the unicorn.  ‘We’ll come and fetch you.’
‘And Ash-ting.’

‘Yes, of course.  Ash-ting too.’
‘I can’t wait,’ shouted Tara turning a cartwheel in the grass and sending the fairies flying.
‘Bye Zandara,’ they all called as the two unicorns vanished in the blink of an eye.

Tara was so excited she could hardly eat her lunch.  She was bursting to tell someone her secret but there was no one who would understand.  So after lunch she and Ash-ting went up to her bedroom and she talked and talked about her very own baby unicorn until her kitten fell asleep.

Two nights later Tara and Ash-ting were woken by a white light and to their delight it was the big unicorn with Zandara.
‘Would you like to visit the Unicorn Kingdom with us,’ the big unicorn invited them.
‘Yes please,’ shouted Tara forgetting it was night time.  Luckily no one woke up!
‘Meow, meow, meow,’ responded Ash-ting leaping from the bed.

Tara was glad she was wearing her new High School Musical pyjamas and dressing gown.  She asked if Ash-ting could ride on Zandara all by himself but the kitten looked horrified and so did the baby unicorn.  Tara giggled.  She had only been teasing and was not surprised when the big unicorn shook her head and laughed.
So Tara and her kitten rode on the big unicorn while the baby pranced beside them.

They flew up and up, past the stars and the moon, until everything was quiet and still.  Then they approached two big white gates.  A unicorn stood on either side of them and greeted them as they entered.

It was so bright in this Kingdom that someone handed Tara and Ash-ting special dark glasses!
‘You look cool,’ Tara giggled to Ash-ting and he meowed proudly.  ‘You look cool too Tara,’ he responded and she tossed her hair back with pleasure.

Wonderful bright coloured birds flew and sang round them.  The trees were all covered in fruit and there were flowers everywhere.  Ahead they could see several unicorns standing or lying in a meadow of emerald grass and golden flowers.  One was drinking from a stream of silver shimmering stars.

And amongst them gambolled baby unicorns!
When they saw Tara and Ash-ting on the big unicorn with the baby beside them all the foals ran towards them.  Tara thought it was one of the happiest moments of her life when the foal ran up to her in front of them all.
The big unicorn spoke and told them that Zandara was to be Tara’s unicorn and would help Tara do good things to help people.

All the unicorns and their foals made a circle round Tara and Zandara and Ash-ting for Tara was holding the kitten tight.  They pointed their horns upwards and a great burst of stars flew up into the air and then all over them.  It was like being stroked by warm tingles.

The big unicorn asked Tara if she would like to make a wish.  Tara thought of the new computer game she had wanted for ages but she caught Ash-ting’s eye and knew that was not the sort of wish she should make.  All of a sudden she burst out.  ‘I wish that all cruel people open their hearts.’

There was a huge flash like pink lightening and a hole opened up in front of her so that she could see right down to Earth.  Everywhere she saw people’s hearts suddenly flash pink.
‘Wow!’ she thought excitedly.

The unicorn told her that millions of people had been touched and had opened their hearts for a moment.  ‘It may not last,’ she added but those people will remember and it will make a difference.  Thank you Tara.  You deserve to have Ash-ting and Zandara.’

And Tara’s heart glowed pink as the unicorn brought her back to the oak tree again.