Tara and the Storm 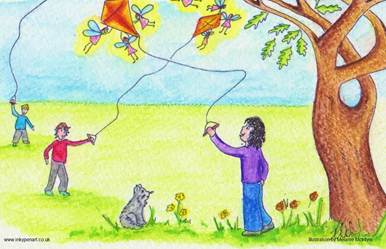 In the field behind their house Tara, Dad, her brother Jack and his friend Kevin were having a wonderful time flying kites.  The wind blew Tara’s hair and she laughed in delight.  But when it fluffed up the fur on Ash-ting’s back the little kitten meowed in protest.
Suddenly Tara noticed that streams of tiny winged creatures, dots of light like miniature fairies were swarming with the breeze.  They were holding up the kites.  Then they played and swirled as they let the kites plummet down, only to dive down to pick them up again before they touched the ground.
‘Who are they?’ Tara whispered to Ash-ting.

‘They’re air elementals called sylphs.  They make the wind blow.  Why don’t you tell them what you want them to do?’
So Tara sent out a thought to them, ‘Hallo sylphs, please will you take my kite up higher.’
Then she laughed as the sylphs spiralled up high with her kite and she screeched with delight as she ran fast, holding tightly to the string.

Tara and her unicorn had helped little Kevin when he was being bullied while his mother was very ill in hospital.  Now his Mum was better and tomorrow the family were going abroad on holiday.  Kevin was very excited and kept saying he wanted to go on a sailing boat.  Tara did hope they had a lovely time.

Two weeks later Tara and Ash-ting were in bed, snuggled under the duvet, listening to the wind howling and the rain lashing down.
‘The wind and rain are cleansing this area of negative energy,’ explained Ash-ting.

‘Well I’m glad I’m not out in it,’ responded Tara, sighing with contentment in the warmth of her cosy bed.  ‘Kevin will be back tomorrow and we’ll hear about his holiday.  I wonder if they went sailing.’

At that moment they heard a tapping on the window.
‘What’s that?’ exclaimed Tara.

‘Go and open the window,’ suggested her kitten.
Reluctantly she got out of bed, slipping on her dressing gown.  She pushed the window up.  Marigold, the fairy, stood there and dozens of tiny sylphs streamed in with the wind and fluttered excitedly round the bedroom.
‘Marigold! What do you want?’ Tara was surprised.

Marigold stepped over the ledge into the room.  ‘We need your help Tara.  Kevin’s family have been caught in a terrible storm at sea and must be rescued.’
Tara knew that there were some things angels and elementals could not do and that a human had to do them.  This must be one of those.

‘Oh poor Kevin!  Is his Mum alright?’ Tara gasped.
‘She’s very frail still but we hope she will be okay,’ Marigold responded.  ‘The elementals are out of control and we fear the boat will hit the rocks.’

Tara felt her stomach churning with shock.  She listened to the wind and rain for a moment and cringed.  ‘You want me to go?’  But she knew the answer already.

Just then a golden light appeared in the room.  It was Kevin’s guardian angel.  ‘Please help us.  It is urgent,’ he urged.

Tara nodded, quickly donning her slippers.  ‘Is my unicorn going to take me there?’ she wanted to know but Marigold shook her head.  ‘All the unicorns are busy trying to protect nature from the storm.’

At that moment there was a crash as Tara’s dragon burst through the wall and skidded across her room almost banging his nose on her bed.
‘Duggie!’ she exclaimed.

‘I’ve been sent to take you to help Kevin’s family,’ he gasped.
Marigold said sternly, ‘Calm down, Duggie.  For our plan to work Tara must calm the sylphs down.’

Duggie’s tail drooped for he hated being told off.  But the kitten put out his paw and touched him sympathetically so he felt better.

Tara picked up Ash-ting and placed him under her dressing gown so that only his face peeped out.  She climbed onto her dragon’s back.  ‘Tell us about it on the way,’ she said.

‘Right-oh,’ Duggie replied and shot out of the window into the rain.  The little girl was drenched but they soon rose above the storm and streaked across the world to the Caribbean.

As they flew Duggie told them, ‘Petronella your mermaid friend and her brothers are trying to save the boat but the storm is too fierce.  The waves are enormous.’

Tara’s eyes grew huge and she felt quite sick.  ‘But what can I do?’
‘Calm,’ whispered Ash-ting as he snuggled against her.  ‘Keep calm and command the air elementals near the boat to calm down too.  If they do the waves will subside.  Then Petronella and her brothers will be able to get Kevin, his family and the boat crew to land before the boat goes on the rocks.’

‘Ash-ting you make it sound so simple but I’ll do my best,’ said Tara bravely though her knees trembled.
The kitten purred to re-assure her though he felt pretty scared too.

Suddenly they could see a boat below them.  Huge waves were dashing it towards cruel, jagged rocks.
‘There!’ pointed Tara in horror.

Ash-ting meowed, ‘Calm Tara,’ so the courageous little girl shut her eyes and breathed deeply as she had been taught, to settle herself down when she was too excited.  ‘Calm, calm,’ she whispered to herself.

‘Tell the sylphs,’ reminded the kitten, so Tara said aloud very firmly, ‘Calm sylphs.  Stay calm.’  They heard her and responded.  Suddenly the wind dropped.  The waves round the boat turned into silky ripples.
‘Calm Sylphs.  Stay calm!’ repeated Tara as her dragon streaked like an orange flash down to the boat and landed on deck.

She could see the boat was about ten metres from the vicious rocks but to one side there lay a sandy beach.

‘Ask the sylphs to blow us gently towards the beach,’ suggested Ash-ting.  Calmly Tara did so and gradually the boat moved away from the rocks.  But Tara couldn’t keep it up and when a giant wave reared up and crashed over the side.  She screamed.

Kevin and his parents were cowering in a corner of the deck trying to shelter from the torrent of water.
At that moment Tara saw Petronella, the mermaid, reach her arms out towards Kevin.

He looked at her with big trusting eyes as she drew him to the side of the lurching boat where Petronella grabbed him in her strong arms.  They saw her holding him above the waves as she propelled herself with her powerful tail towards the beach.

After that it was easier.  Petronella’s brothers, Jolly, Julian, Joseph, John, Jerry, Jimmy and Jupiter, swarmed to the side of the boat looking like, fit, handsome young men.  They lifted Kevin’s parents safely off the deck and carried them to the shore.   Then they did the same for the crew as well as Tara and Ash-ting.   As they deposited them onto the beach the storm raged furiously again.

Kevin’s family and the crew were watching the boat being dashed to smithereens on the rocks so they did not notice the merpeople disappear.  Only Tara and Ash-ting called ‘Thank you’ and waved goodbye.  They were disappointed they did not have time to play before Duggie picked them up and whisked them back home.

Next morning Tara’s mother was very annoyed that her dressing gown was wet.  ‘I suppose you opened your window and got soaked,’ she said crossly.  ‘It’s so wet anyone would think you were out in the storm.’
‘Sorry Mum,’ apologised Tara not daring to look at Ash-ting who she knew was grinning at her.

A week later Kevin and his parents came round to tell them all about their holiday.  They spoke of the terrifying danger of the storm and how the boat smashed on the rocks.  Everyone listened open mouthed with horror.
‘We still don’t really know how we were saved,’ Kevin’s Dad said.  ‘We think we must have been thrown onto the beach by a freak wave.’

‘But we all had the same weird dream,’ continued his Mum.  ‘It was very odd.’
‘Yes – er – we all dreamt that these handsome men lifted us from the boat and carried us to the beach but the really funny thing is that Tara and Ash-ting came onto the boat to help us.’
There was a strange silence.

Then Mum and Dad laughed at the absurdity of it.  Tara’s brother and sister giggled.  And Kevin’s family started to chuckle too.  Of course they must have imagined it!  And so what could Tara do but join in.  She laughed till she cried and Ash-ting meowed in agreement.

And Duggie, the dragon, the sylphs and Marigold the fairy who were watching through the window all laughed too.