Tara and the Waters by Granny Diana 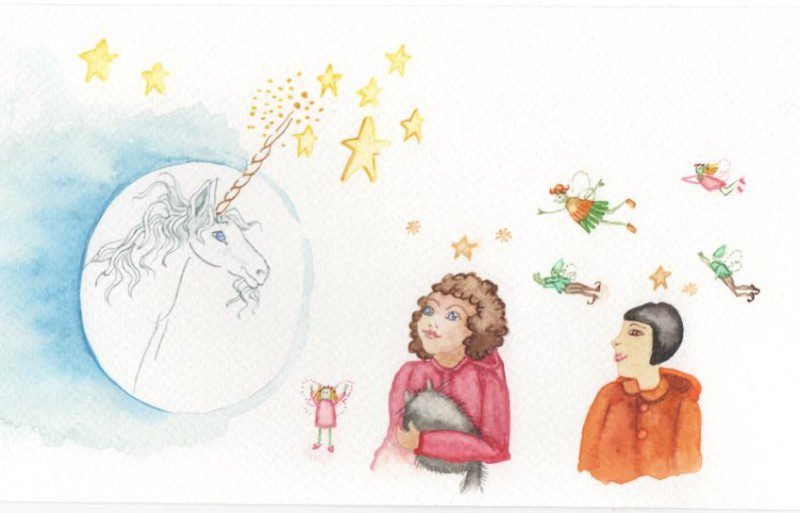 Written by Diana Cooper and Illustrated by Maggie Waters.

Tara loved it when her Chinese friend came to play for Mei Lan too could see fairies and angels.  Today there was a nippy wind and the children were glad of their coats as they ran round the meadow behind Tara’s house trying to catch falling leaves.

Her Mum had told her they could make a wish if they caught one so Tara was leaping all over the place because she wanted to wish for a new bicycle for her next birthday.   Ash-ting, the little grey kitten, was prancing around between them and they shrieked and laughed as they tried not to trip over him.  There were several elves, fairies and sylphs twirling and dancing in the leaves with them so it was good fun.  The sylphs who are little air elementals were blowing the big leaves towards the girls but they kept jerking and swirling out of their hands.

Before either of them caught a falling leaf Mei Lan stopped and pointed into the distance. The elementals all stood still and watched.  ‘Look Tara,’ Mei Lan called.  ‘A unicorn is coming.’   Tara turned and looked in the direction her friend was pointing.  She could see a pure shining white light far away and it came closer as she gazed at it.  Unicorns are pure white angelic horses and they love children, especially those with good hearts.  Tara had met this one before and she started to wave as it came closer.

Ash-ting, who could talk to Tara, said, ‘Oh Tara, he wants to take us on a journey.’  And he jumped up and down in excitement.  Tara picked the little furry kitten up just as the shimmering white unicorn stepped out of his bubble of white light in front of them.  He showered them with glittering stars from his golden horn and the elementals and little girls all clapped in delight.  They were twittering and buzzing with joy.

Tara, who was often rather bold, shouted excitedly.  ‘Are you taking us on an adventure somewhere?’ The unicorn nodded, his blue eyes flashing with pleasure.   The girl remembered the magical quest she and Ash-ting had undertaken once before and asked quickly, ‘Are you taking us on a mission?  Is there a job for us to do?  Can Mei Lan come too?’  Mei Lan who was always very quiet and polite smiled nervously.

The unicorn was very dignified.  He waited silently until the excitement had died down and even Tara was quiet.  Then he smiled at them all.  ‘I have come today to take you on a mission for I have a task for you – and yes, Mei Lan you are invited too.’

Mei Lan blushed bright red as she and Tara looked at each other in delight and Tara bit back all the questions she wanted to ask.

‘Even us?’ squealed Marigold, the fairy.  The unicorn threw back his head and laughed, so that his mane danced in the breeze.  ‘You can all come with me but I have really come to fetch Tara and Mei Lan.’

‘And Ash-ting?’ burst out Tara.  ‘Of course, Ash-ting.  We value your wisdom,’ responded the unicorn gravely and the kitten puffed up his fur to make himself look grander.

‘Excuse me Mr. Unicorn but where are you taking us?’ asked Mei Lan in a quiet voice.

‘We are going to the mountains of Tibet to meet some very special people and to collect something,’ the unicorn told her. They all looked at each other in wonder.  ‘Tibet!’ exclaimed Tara and Mei Lan together.  They had talked about Tibet at school and knew that there were snow covered mountains there and lots of sacred temples.

The unicorn knelt down so that Tara, Mei Lan and Ash-ting could clamber onto his back and the fairies, elves and sylphs hopped on too.  Marigold sat on Tara’s shoulder and held onto her hair as the unicorn rose up in a flash of white light.  ‘Tibet here we come,’ yelled Tara in a very loud voice as they flew over her house.  Ash-ting patted her arm with his paw.  ‘Sh.  Your Mum might hear you,’ he whispered.

Seconds later the children put up their warm hoods and pulled on their gloves as they flew above high white mountains.  The sun glinted so brightly off the surface of the snow that they had to screw up their eyes to see.  The two children pointed to a beautiful temple ahead of them built into the hillside.  As they glided down to land they saw two very tall people waiting for them.  Tara noticed that they had white light shining all round them.

‘These are Masters of the White Brotherhood,’ murmured the unicorn by way of introduction.  ‘Please say Good morning Masters.’

The children, the kitten and elementals all obediently and politely chanted, ‘Good morning Masters,’ before they jumped down into the snow.  As he landed in the soft, wet stuff which felt like frozen cotton wool, Ash-ting meowed plaintively.  He did not like it!  So Tara scooped him up into her arms and hugged him to keep him warm.  ‘It’s snow,’ she explained to him.  ‘I’ll carry you.’

‘I don’t like snow!’ muttered Ash-ting grumpily licking a cold white flake off his paw.

The Masters were watching with amused expressions.  ‘Welcome all of you,’ the taller one said in a soft deep voice.  ‘We have something to show you.’

‘Please take this,’ said his companion giving each of them a wooden bowl.  ‘And fill it with snow.’

Rather puzzled the children took the bowls and scooped up handfuls of pure shimmering snow.  The elementals had tiny wee bowls which they filled.

‘And now we want to show you something,’ the first Master smiled.  They followed him into the temple which seemed small on the outside but was huge, warm and welcoming inside. The floor and walls were covered in brightly coloured rugs and there were dozens of crystals which were lit up from inside.  It looked like fairyland.

They all placed their bowls on a table and waited as the snow melted in the warmth and became water.  Then the Masters explained.  ‘Water is very special.  What do you use it for?’

‘Good,’ the wise man nodded.  ‘Now I want you to put on these special glasses and see what happens to the water when we bless it or sing over it.’  He gave Tara and Mei Lan some weird looking glasses with thick lenses.  Ash-ting had some smaller ones and the elementals were given tiny little pairs of specs.   They did look odd and they all giggled, even Ash-ting in a funny meowing voice.

At first their bowls of water looked quite ordinary.  The Master asked Tara to sing a song over them.  She was silly and sang a rude song that she knew.  Ash-ting covered his ears in embarrassment.  ‘No, Tara, no,’ he moaned.  The Masters said nothing but they could all see the energy of the water go dark and discoloured with lumpy shapes.  Tara bit her lip.  ‘Sorry,’ she whispered, suddenly quiet.

The Masters nodded to Mei Lan and she sang a chant that she had learnt from her parents.  It sounded very strange to Tara to hear her friend sing in a foreign language but the water lit up and beautiful stars and other shapes started to swirl in it.  ‘Ooh, ‘ murmured Tara, quite startled.

The fairies and sylphs and elves sang their elemental songs and, my goodness, the water seemed to shimmer green and the shapes changed. They were just as beautiful but different.   Tara was never subdued for long.  ‘Please will you sing over the water,’ she begged the Masters.

They smiled at her and said they would chant a peace blessing.  It sounded wonderful sung  in their deep melodious voices.  They could not understand the words but they all knew it was special.  Wow! The water glowed golden and was filled with glorious shapes.

When they had finished, the girls and Ash-ting and the elementals reluctantly took off their special glasses and stared at the Masters.  The taller one looked at Tara and his brown eyes twinkled as he said in his soft deep voice.  ‘Thanks to Tara you know that what you say affects the energy in water.’   For a moment she was embarrassed but then she said cheekily.  ‘It’s as well you didn’t hear Ash-ting sing.’  Everyone laughed and Ash-ting uttered a couple of sharp meows which rather confirmed her words.

The Master said, ‘This water that we blessed is super charged with peace.  We’d like you to take it back to your home and pour it into some water near you.  It will help spread peace and harmony.’

They all felt this was a very important task and held their bowls sensibly as they climbed on to the unicorn again.  Ash-ting was very careful where he stood so that no one tripped over him.

Ash-ting said, ‘If you pour it into the river, it will touch everyone.’  So they asked the unicorn to stop by the river that flowed at the end of the meadow behind Tara’s house.  They poured the peace water into the flowing river and Tara was sure she saw it sparkle and glow as it spread with the current.

That evening Tara was particularly nice to everyone and Ash-ting said that he was sure she had been affected by the peace in the water.