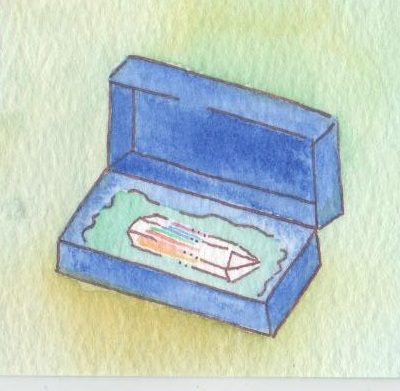 Reece looked up at his teacher who he realised was addressing him with an angry look on his face. ‘I’m not really sure. Sorry Mr Mathews’.
‘Did you hear any of what I just said?’ he asked. Mr Mathews sighed. ‘Page fifty eight, Reece. I’d like you to answer question fourteen for us in your own time please.’

Reece noticed to his horror that his book had accidentally fallen shut, and so he had to open it under the scrutiny of the whole class. ‘Whenever you are ready,’ Mr Mathews added sarcastically. Reece always seemed to be in trouble for not paying attention. He couldn’t wait to get out of the stuffy classroom. Home time couldn’t come quick enough.

His best friend Connor arrived at five as arranged, and they headed straight for the front room to play on Reece’s new games console.
‘Reece, Alice is here to see you; come here please’ Mum called.
Reece sighed. Alice was his Aunt, and even though he liked her, he was busy!
‘Back in a sec,’ he told Connor, who played on without him.

‘How’s my big man?’ Alice beamed, wrapping him up in an embarrassing hug. Reece was glad Connor hadn’t come into the kitchen and seen that. ‘I have a present for you. It’s very special,’ she grinned, handing him a beautifully wrapped gift with a shiny gold label with his name on.

‘Thanks Alice,’ he said unwrapping it, curious. First was a blue box. Inside, wrapped up in tissue paper was a type of rock shaped in a rough point that looked to him like ice.
‘It’s a quartz,’ she told him. In it he could see rainbows. He had never seen one up close before but something about it made him feel shivery and excited.

‘Thanks Alice, it’s really cool’, he said, wrapping it back in its tissue paper and putting it back in its box. ‘Err, I’ve got Connor here so I better go,’ He saw Mum frowning at him.
‘That’s okay, you can go. You are very welcome. We’ll catch up another time,’ she smiled.

Later on when Connor had gone, Reece got his crystal out of the box again and examined it, turning it this way and that. Something made him want to put it close to his forehead. When he did he saw a sudden bright flash of light, and as if whipped straight into a dream, he was somewhere far away from home. Inside a sort of rocky cave full of lights so bright it took him a moment to focus. In his hand he still had his new crystal. He could hear trickling of water and there was an earthy smell.  As his eyes adjusted to the light he saw all kinds of crystals, big and small, all colours and shapes. Ones like his one, and ones completely different. He saw a violet skull carved out of crystal.

It was so amazing he had to get closer and touch it. Just as his hand was about to touch it he heard a voice say:
‘Easy there!’ He jumped and spun around. A tall figure of a man, not quite human and surrounded by bright blue and gold light was looking down at him. He was a dressed like a warrior, and he had a huge sword at his side that glinted and seemed to glow.
‘Don’t I know you?’ he heard himself say.
‘Yes Reece. It’s been a while since we have spoken. That’s great that you can see me again.’
‘You are – hang on – Malachi aren’t you? I thought I had dreamed you up as a kid.’
‘Well I’m real alright. And you are really here, back in the crystal cave, not before time. Come with me.’
‘Back? I don’t think I’ve ever been here before. Have I?’
‘It’s been a while, kid.’
The huge warrior surrounded by a haze of bright light led him through the cave and to an entrance which overlooked a huge sunny valley full of trees. He blinked as his eyes adjusted to the light, and he could see mountains and the ocean in the distance. Just below them was a clearing, he pinched himself to see if he was dreaming. Was actually seeing a red and gold dragon curled up, sleeping? He watched the rise and fall of its breath, feeling his legs turn to jelly.
‘Okay, let’s go now. There’s a dragon down there,’
‘I know there is. Just watch.’ Malachi placed a hand of light on his shoulder. He instantly felt calm and brave. Just then, out from the trees ran a very young boy, perhaps four at the most. Reece’s heart thumped in his chest, he was about to shout, when Malachi hushed him.

He trembled as he saw the young boy approach the sleeping beast and stroke him on the nose! The dragon raised its head, opened up its wild green eyes, and the boy jumped up on its back. The dragon stretched and after a short lolloping run it rose up into the air with the young boy. They flew so fast, within seconds they were a tiny dot and then completely disappeared.

‘Malachi, do something. Can’t you help him?’ Reece cried.
‘You have forgotten, Reece, when you were that age you used to work with your dragon this way too.’
‘That’s too crazy. That can’t be right. I’d remember it. You don’t forget stuff like that.’
‘Breathe Reece… You have simply forgotten. The crystal your aunt gave you is helping you to remember things. As human children grow they tell themselves that these kind of things were just a dream. They forget so much.’

Suddenly out of the sky their shape reappeared. The red and gold shape twisted and twirled towards them. It had a very long tail, and as they approached the dragons glowing green eyes seemed to stare straight at Reece. He tried not to feel afraid. He trusted Malachi and knew he would always keep him safe.
‘Hey Toby, come up here with Twister and meet Reece,’ Malachi called. To Reece’s amazement the little boy followed by the red dragon came walking up to meet them. Toby stood in front of him, smiling. The dragon had his head down low, sniffing and snorting at the ground. Reece felt a little nervous around him, but he tried not to show it. ‘Where’s your dragon?’ asked the little boy.
‘Mine? I don’t know,’ he looked up at Malachi.
‘All in good time Reece. You need to get back home very soon.’
‘But… when am I going to come back? When will I meet my dragon?’
‘Ask to meet him in your dream time tonight. Then the next time, you’ll probably be ready,’ Malachi said. The boy Toby was still smiling. He seemed to have a haze of golden light around him, almost like Malachi’s blue and gold lights, but Reece wasn’t sure if his eyes were playing tricks on him or not. It was all a lot to take in.

‘He’s not an angel you know,’ Malachi seemed to read his mind again. ‘All humans have that beautiful light around them, but sometimes they muddy it up with their fear-based thoughts or unhappy feelings. You have it too right now.’
Reece looked down at his hands but he couldn’t see anything.
‘You will see it. Be patient,’ Malachi laughed.
Reece waved to Toby; the dragon was still snuffling around in the dirt, making loud noises through his nostrils. He followed Malachi into the cave, marvelling at his beautiful wings made of sparkling light, he hadn’t spotted these earlier. ‘So he is an angel warrior,’ he thought.

‘Malachi, how do I know all of this wasn’t just a dream?’ he asked as they reached the place where he had started from.
‘I’ll tell you what… you have difficulty concentrating in class don’t you?’
‘Yes. How did you know that?’
‘I know a lot of things. I can give you something that might help.’ He showed Reece a smooth round polished stone, dark silvery grey in colour. As it passed into his own hands it changed its shape into a kind of headwear. He placed in onto his head and suddenly the soles of his feet felt tingly and cool and his mind felt very focussed. He began remembering some of his lessons that seemed so muddled earlier that day; he felt as though he could sit down and do his homework really easily without feeling bored or distracted.
‘That’s magic,’ he exclaimed.
‘When you get back the stone will go back to its original shape. Put it in your school bag, out of sight, and you just need to think of the stone and it will help you in the same way. Nobody will see anything as it will be invisible and it will magically place itself onto your head, whenever you ask it to.’
‘That’s amazing!’
‘Crystals are amazing Reece. But please remember; don’t play those computer games for longer than an hour a day. It has the opposite effect of that crystal; making your concentration worse and making you feel tense.’
‘An hour. I guess that’s not too bad. Mum says that too sometimes.’
‘She’s on her way now Reece. Come back soon!’…

He seemed to land with a thud back onto his own bed.
‘Was that for real?’ he said out loud to himself. In each hand he held a crystal. One was the one his aunt got him, and the other was the smooth silver grey one Malachi had given him. He stuffed it under his pillow, just in time before Mum came in.