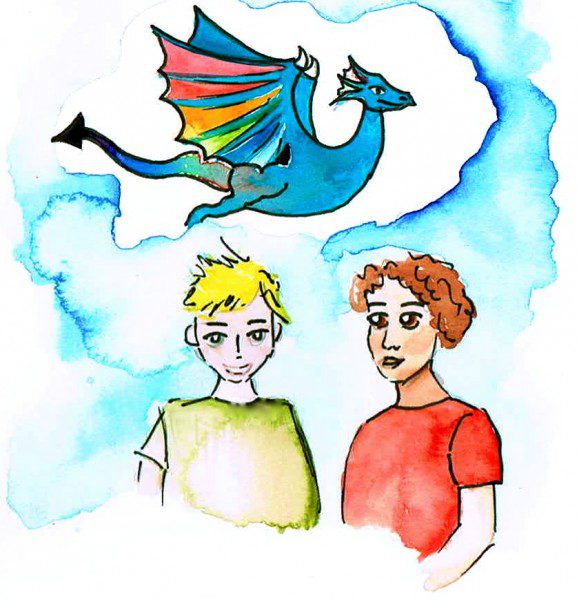 Written by Jennifer Crokaert and illustrated by Cathelijne Filippo.

“I don’t want to go to school, Mum, I think I might be sick!” said Timmy at breakfast.

“You’re not sick Timmy!  I know it’s hard to go to new places, and to be a stranger when everyone else has friends,” replied Mum gently. “Do you want to know a secret?  Sometimes adults find it hard to go to new places and meet new people too.  But remember, we never go anywhere by accident: there is always a friend waiting to be discovered.”

Timmy wasn’t so sure.  But he didn’t really have a choice.

“Come on, let’s go, sweetheart,” said Mum after breakfast, “you’ll discover it’s not as bad as you imagine…”

When Timmy arrived at the school, the children in his class seemed nice enough, but they weren’t very interested in him.  They talked to each other about their holidays, and the adventures they had.  They didn’t seem to notice him at all.

‘They don’t like me,’ thought Timmy, as he sat eating his sandwich at lunch time.

“Clarisse!” cried Timmy, as an enormous rainbow coloured dragon with a long tail and a big smile swooped down beside him.

“They don’t like me.  They don’t talk to me, they don’t even want to eat lunch with me,” repeated Timmy.

“Ah, well that’s because you have your invisibility cloak on!” joked Clarisse, “you don’t want them to dislike you so you’re trying to make yourself invisible.  Hop on, come with me!”

In the blink of an eye, Timmy was sitting on Clarisse’s rainbow-coloured back, riding up into the sky.  “Where are we going?” asked Timmy.

Clarisse always landed very gently, even though he was an enormous dragon.

“Follow me” said Clarisse, as he set off to the courtyard, where a fountain gurgled and spluttered.  Timmy followed, hot on Clarisse’s heels.

Clarisse stopped in front of the fountain and breathed fire.  He didn’t always breathe fire.  He only breathed fire when he was helping Timmy.  “Flames burn away fear to show the truth,” Clarisse always said.

As the flames touched the water in the fountain, the water magically turned into a screen.

“That’s me!” cried Timmy, looking at himself at breakfast, playing with his toast, listening to his Mum.

“Yes it is,” replied Clarisse.  “Now, watch the rest of you day: what do you notice?”

“Yes, that’s right,” said Clarisse, who could read Timmy’s thoughts, “the boy who asked you about the toilets is new too, and he’s also looking for a friend.  My dragon friends have told me that there are a couple of boys in your class who would be terrific friends for you: but none of them can see you at the moment, not properly anyway.

“Do you remember the first time you rode on my back?” asked Clarisse.

“You were scared, weren’t you?” said Clarisse.

It was true, he had been terrified.  Clarisse is a huge dragon and Timmy was afraid he might make a mistake, or worse, fall off.   But gradually his confidence grew. They started with small flights, so Timmy could practice, until finally they were soaring high above the clouds, diving straight down towards the earth and swooping up at the last minute.  All this, without a saddle and without reins! They trusted each other and Timmy became fearless.

“Indeed!” smiled Clarisse, “you’re not invisible when you ride me, are you?  You are fearless and confident.  That’s the real Timmy.  Do you remember what I said to you that day?”

Timmy did remember.  “You said that often the things we are most afraid of come from inside, not outside.”

“Yes! I did!  That’s right!  Sometimes we are so busy imagining things are terrible that we don’t notice that real life is much nicer than our imagination.”

“Well done Timmy, that’s it!  The children around you wanted to be your friend, but you were so busy imagining the worst, that you didn’t notice them. Now, do you think you can go back to school and let them see the real you, the bright, shining you who can fearlessly dive on a dragon’s back?”

“Oh yes!” replied Timmy.  It may take some time, but it took time to learn to ride Clarisse, so he knew he could do it.  He could be fearlessly himself at school too.

In the blink of an eye, Timmy was back at the table, looking at his sandwich.  He sat up straight in his chair and he looked around: two boys were staring at him.

“Were you daydreaming?” they asked.

“No way! I was with my friend Clarisse, he’s a dragon,” replied Timmy.

“We love dragons and dinosaurs!”

At the back of the room, Clarisse smiled as he saw Timmy lean forward, excitedly discussing dragons and dinosaurs with his new friends.