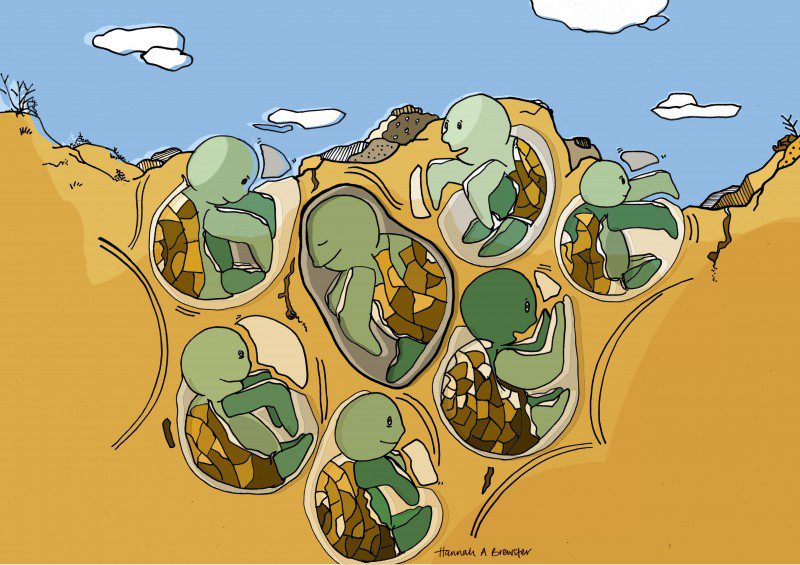 Written by Susan Browne and illustrated by Hannah A Brewster.

Logos was a baby sea turtle. He woke one morning and felt different. It felt as though a light had switched on inside him. The light grew brighter and brighter. He knew that it was time to break out of his egg. Time to climb out of the egg pit and onto the beach, and to go to the sea. Wriggling and stretching he broke through the shell, a little at a time. It was tiring, so he would break a little of the egg and then rest. Then try again. There was a lot of noise around him, as his brothers and sisters were having the same idea. He could hear cracking and chattering, and laughter. ‘Helloo, hello hello!!’ said many voices. ‘It’s time to wake up, it’s time to go,’ they said. Finally he wriggled free from the shell, a little left on his head like a funny hat. He saw the faces, and flippers, and shells of many of his brothers and sisters. ‘Hello everyone,’ he giggled.

‘Let’s go, Logos’ said Glider, one of his sisters. She pushed on upwards away from the group, up through the sand.

‘Wait for me,’ he said. He pushed the sand away and burrowed up to the surface of the beach. The sand was hot. After a lot of shuffling and pushing he began to feel sleepy.

‘Wait Glider and Logos, we’re not supposed to come out in the day time. It’s time for rest now,’ said another sister, called Mono. Logos yawned. He felt very tired. ‘Wait Glider,’ he said, and then fell right into a deep sleep in the warm sand. He dreamed of sand and water and waves.

When he woke there was nobody there. The sand was cool now. There were no voices or clamouring. Only himself. He climbed quickly out of the covering pit and out into the air of the beach. The moon smiled down at him. It had a friendly face. He wondered what his mother’s face looked like, if she looked like the moon.

‘Where are they all? Did they go without me?’ he said, feeling afraid. The moon smiled back, and the silver waves whispered to him ‘come on in.’ He shuffled towards the water. The sand was getting wetter as he got closer. He could taste the salt; it made him feel really excited. He just knew it was going to be brilliant.

The water tickled his nose and then a big wave went right over his head and washed away his shell hat. He squealed with delight. Then the water lifted up his body, and he knew he must swim. With a wave of his flippers he was off into the water. He swam and swam. In the darkness there were bright colourful lights up ahead. A shoal of jellyfish shivering and shimmering.

‘Hello, have you seen any of my brothers and sisters?’ he asked them.

‘Maybe that way,’ said one, pointing a tentacle out to sea.

As the sun rose on the island Logos could see more of the beauty of the ocean floor below. Little coloured fish swam around rocks. Long streaks of green seaweed stretched up like forests. He swam down to explore the rocks which were covered in coral and what looked like flowers. Soon, he began to feel tired. But still he hadn’t found any of his brothers and sisters. He fell asleep floating in the water, and the tide carried him somewhere far away.

When he woke everything looked different again. He wanted to make a friend. He thought he would never find his brothers and sisters again. Suddenly there was a startling thunderous noise rippling through the water. He shuddered and dived down deep, just in time as a speedboat roared past above him. Just as he swam up again he narrowly missed a water skiers skis.  As he looked around he realised he was in a very dangerous place, where many people were using the water with big noisy boats. He cowered in the water and sank down to the sandy ocean floor.

‘What will I do,’ he asked nobody in particular. Then he felt the light glowing inside him again. The light that before, told him what to do. ‘Stay low and go,’ he whispered to himself. He swam carefully, near to the sandy ocean floor, further out to sea. Just then another boat came ripping past above his head. The water was all disturbed after it, making him bob around. Then he noticed a shell spinning along in the water, sinking towards the bottom right in his path. It was another baby turtle. It looked as though it had been hit by the boat! He swam quickly towards it. The face was curled under the shell, along with the flippers.

‘Are you okay?’ he said, gently tapping the shell with his flipper.

‘I want to go, far away from here,’ said a voice. It was his sister, Glider.

‘I am here, I will help you,’ said Logos. But he didn’t know how to help. He wondered if the light was still inside him to tell him what to do. ‘Glider, maybe you have a light inside you. I have one. See if you can make yours come on.’

Slowly her head peeped out and she looked at her brother. Her eyes changed from sad to sparkly. ‘I have it too,’ she said. ‘It told me to hatch out of the egg. Now it’s telling me we need to go this way. I can feel another light, Logos, coming from under the sand deep down somewhere. It’s like a pathway we should follow. Can you feel it?’

Logos stopped moving for a moment and focused on the light inside. She was right! There was another light coming from deep under the earth. He knew instinctively which direction to swim in. ‘I feel it!’ he said. ‘Let’s follow it. We should go low down here, slowly and carefully. Can you swim alright?’

‘Of course,’ she smiled weakly, and she pushed herself off the sand bed and towards the deep ocean. Logos followed close behind, keeping watch for any boats or other things. They made it out as far as the coral. More than fifty little turtle heads popped up, and said ‘hello!’

The baby turtles made a special place for Glider to rest, and they all watched over her. The next day she was feeling fine and the turtles played happily on the reef.