The Fairy and the Unicorn 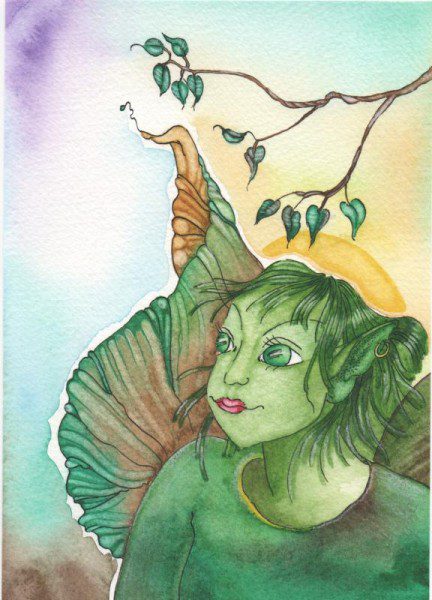 Primara was a unicorn and he had spent much of his earth time in the forest. He was very good friends with a fairy called Mooncome. Mooncome was quite small and she would play on his mane and run over his back as though she were running in a meadow.

They went everywhere in the forest together. Sometimes Primara would go outside of the trees and gallop in nearby fields, with Mooncome laughing and hanging on as best she could. In the summer people would come to the forest to camp, in tents and caravans. Mooncome and Primara were fascinated by people and loved being near them. Especially the children who played in the trees. They wished they could see them and they could all play together.

One day the great forest angel appeared to Primara and Mooncome. She was a huge light that sparkled and glittered before them.

‘It is time for you two to have an assignment together,’ she said. ‘I see you like humans, so it will be helping one of them that needs you.’

The great angel showed them a girl called Mirren. She was thirteen years old. She was having difficulty with her schoolwork and needed some help.

‘How can we help her?’ asked Mooncome. ‘She’s very old.’ Mooncome had heard of younger children being helped by the fairies, finding it easier to believe in them.

‘Mirren is very creative, and she has forgotten to use her talents, and so is having trouble with her schoolwork. She has forgotten she is good at art, but if she can revive her artistic ability other things will fall naturally into place for her.’ said the angel. ‘She needs to ask for your help, and then you will know just what to do.’ And that was all the angel said.

So for the next while Primara and Mooncome spent time with Mirren. They visited her at home, at school and even in her dream time but she didn’t seem to know they were there. And so she did not ask for their help. They waited.

Two days later Mirren’s Mum was tidying out the attic and she came across some of Mirren’s old drawings. She brought them down to show her.

‘Fairies and unicorns, Mirren,’ Mum sighed. ‘Do you remember?’

Mirren looked up from her work, her head in her hands. She looked at the drawing held up by her mother and a smile quivered on her lips. ‘Those were the days, things were easy then.’

Her mother hugged her. ‘I love this one especially. Can I put it up on the wall?’

‘Ok, but let’s say somebody else did it. It’s embarrassing now.’

Mirren looked at the picture she had drawn so lovingly when she was eight. It was of a mighty unicorn with a tiny fairy on its back. The way she felt when she had drawn it came back to her. It felt really good. She ran her fingers over the dusty pastel colours. ‘I want to feel some magic in my life again,’ she whispered to herself, not noticing the fairy and the unicorn looking over her shoulder admiring the picture which looked uncannily like themselves.

‘Does that count?’ said Mooncome. ‘Did she just ask for our help?’

That evening Mirren was thinking about the way she was when she was younger. When she used to draw and read and play. How happy it was, and how everything was much simpler. Now she felt overwhelmed with studying, it had become hard to concentrate. She was doing an art project and had no ideas any more. She took out her old drawing materials. It had been such a long time since she had used them. She looked at her big drawing pad blankly. She closed her eyes and immediately she could see a unicorn and a fairy. ‘I can’t draw those again,’ she sighed. And yet the image wouldn’t leave her mind. Suddenly the unicorn leapt up into the air and this image of him leaping was so clear in her mind. Her hand picked up the charcoal and began drawing. The shapes formed easily on the page. It looked even better than the one she had drawn when she was younger. And the detail found its way easily. She felt a sense of excitement growing like a light inside her.

Primara and Mooncome played around her joyfully. ‘That’s it, Mirren. You are great at drawing us. So you want to be our friend?’ Mooncome shouted.

Mirren looked up around the room. It was as though a little fairy was talking to her, asking to make friends. She smiled. ‘Is this what you wear, my little friend?’ she said out loud, drawing the fairy’s little green and pink outfit and her dainty face.

‘Yes yes! It’s just like me. Thank you Mirren.’

Mirren felt so much better about things having done the drawing. When she showed it to her art teacher he was thrilled with it. He suggested that she do a series of these types of drawings, using the same characters if she liked. Nobody laughed and said it was silly that she was drawing kiddie things. The other students were awed and amazed. A boy in the class who had been struggling at art started drawing wizards soon after, and he was very good at it. It was as though the whole class had become more magical, and there was much laughter and fun, as well as good work.

And from that day forward, Primara and Mooncome visited Mirren often. They helped others too. Mirren found art and her other subjects much easier again. She often imagined that she was actually talking to the unicorn and the fairy. She though, it was as though they spoke back to her, helping her with her drawing. Little did she know, they actually were.

Activity: Think of something you would like help with in your life. Close your eyes, relax and get comfortable. Imagine meeting your very own fairy and unicorn. What would they like to tell you? Have fun.